​Altair 818 Hornet Review, the easy to fly outdoor drone by Altair. Could this be the ultimate beginner camera drone? Let's find out... 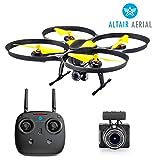 Let's Fly Wisely is an amazon affiliate, we receive a small amount of commission for the product recommendations below, this in no way affects our recommendations, read more here.

​The Altair 818 Hornet is designed for beginners, making ​it the best drone for kids this year which won our award in our best drones review. The drone comes with multiple skill settings to facilitate kids and beginners. It looks good with great build quality and costs nothing more than 200 dollars. Regarding design, the 818 Hornet is standard sized, with ring-like propeller guards on each of the drone’s four arms. The guards are essential during crashes, which are normal for beginners and kids. This UAV comes in a combination of blue and black with LED lights at the bottom to help in distinguishing the rear and front of the gadget.

The 818 Hornet features a wide-angle FPV (first-person-view) HD camera optimized for image stability. FPV cameras are great for controlling the drone from the screen of your smartphone or VR goggles. At 200 dollars, the 15-minute flight-time on the 818 Hornet is one of the best in the market. Furthermore, it comes with a spare battery pack, which doubles your flight time. The range of the flight controller is 150 metres. Using this drone indoors is not a good idea since it doesn’t come with obstacle avoidance technology like most high-end drones.

​​The 818 Hornet’s best new feature is its 15 minute flight time. This is almost completely unheard of in drones under $500. And that’s off of a single battery – the Hornet comes with two, meaning that you can fly the quadcopter for 30 minutes at a time. Obviously, any recreational user can enjoy this feature, because it means you get to spend more time with your cool new toy.

​The camera of the АА818 comes pre-installed, so you don’t have to purchase one separately. It’s a 120 degree Wide-angle 720P HD camera, which I actually really like, as it’s a rubber damper camera, which ensures your photos or videos won’t be blurry or shaky (or at least it will significantly lower the blurriness or shakiness of your shots). One huge advantage of having such camera is the ability to control the drone via FPV (first-person-view) from the screen of your smartphone or via VR goggles, which you should buy separately.

​The design of the AA818 Plus is simple but effective. The body of the drone is quite regular in terms of size, but the difference comes from the 4 “rings” which act as propeller guards on each arm of the drone. The plastic guards actually make the drone look bulkier than it really is, but that’s not necessarily a bad thing – on the contrary, since it’s made for beginners, this will actually help you in the long run, as the guards will keep your drone safe from obstacles or crashes, protecting the arms and the propellers.

​The 818 Hornet is a little too big to fly indoors. Like its predecessor, it’s very easy to fly and control, and pilots of all skill levels should have no problems with the drone. There’s three speed modes, ranging from very lenient to surprisingly fast.

​Flight Modes like Altitude Hole, One Button Takeoff and Landing, and Headless Mode

​In a nutshell when we performing our ​altair 818 hornet review we thought this drone is an excellent priced, easy to fly drone that is the best drone for kids or beginner drones for those new to the sport, an excellent easy to fly quadcopter.