​Ryze Tello Review: Fantastic value for money and fun to fly – but not for serious aerial photographers, let's dive and find out if you should buy this drone. 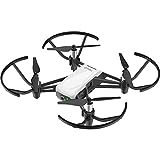 Let's Fly Wisely is an amazon affiliate, we receive a small amount of commission for the product recommendations below, this in no way affects our recommendations, read more here.

In general, most drones under 100 dollars come with many shortcomings. They are unstable, lack advanced features, and pose many other in-flight challenges. Despite costing only 99 dollars, the Ryze Tello ​is the best drone under 100 dollars. It comes with surprisingly different advanced features, but make no mistake this is not a professional drone or a serious camera drone. For example, it runs on a 14-core Intel vision processor, has a five-megapixel camera that can shoot 720p HD video, DJI flight stabilization technology, and a 13-minute battery life. Regarding design and build, the Ryze Tello drone is small enough to fit into your palm. It has a compact frame with an elegant, minimalistic two-tone structure and weighs just about three ounces.

On the downside, the Ryze Tello doesn’t come with a controller. You must rely on its smartphone app with virtual joysticks, which can prove inaccurate and difficult to deal with. To counter this problem, this drone supports third-party attachments, meaning you can purchase a physical controller and link it to the Ryze Tello. It should cost a few extra bucks, which is fine considering how cheap this drone is.

​Beneath the canopy is the Tello’s 1100mAh 3.8V LiPo battery which takes up nearly half the space in the body. The battery features a proprietary slot-in design. There is no firm battery lock and the battery is installed by simply pushing it all the way in till you feel a light click. In my first few test flights of the Tello, the battery popped off quite easily during crashes. This isn’t exactly a bad thing since a battery that disconnects on impact allows for the motors to shut off instantly during a crash.

​Image quality on the Tello’s 5MP camera is quite impressive though not quite as good as the image quality of mid-range smartphone cameras. ​

​Like all other DJI products, the Tello features excellent build quality. I find the build quality of the Tello to be superb and second to none. The Tello’s body is mostly made out of nylon which is a great choice of material since it is highly impact resistant. Nylon motor arms are more likely to bend and flex during a crash instead of breaking. This is a common problem with stiffer materials such as ABS. Although the Tello’s arms are quite stiff vertically, they were designed to offer plenty of lateral flex.

​Flight performance is one of the things that sets the Tello apart from other toy drones. Specifically, the Tello is one of few toy drones at the moment to feature optical and infrared sensors that help in positioning and altitude hold. Under optimum lighting conditions, the downward-facing optical sensor helps the Tello “see” the ground and maintain its flight position while the two infrared sensors help it accurately maintain its altitude.

​With the basic version of the Tello, flight control is done entirely on the Tello app. Interestingly, unlike other DJI drones, the Tello does not rely on the DJI GO app. Via the Tello app, the drone can be flown using virtual control sticks. This isn’t exactly the best way to fly a drone since virtual sticks do not have the same tactile feedback that actual remote controller sticks have. In other words, it’s quite hard for you to have a good feel of how much input you’re putting into these virtual sticks.

​​During our Ryze Tello review the range on thes good enough at 100 metres, with speeds of up to 11 miles per hour. You can use it both outdoors and indoors. In the latter case, you will need to use propeller guards for safety reasons. When the battery runs low, the drone will set the shortest flight path back home for a recharge to avoid crashing.